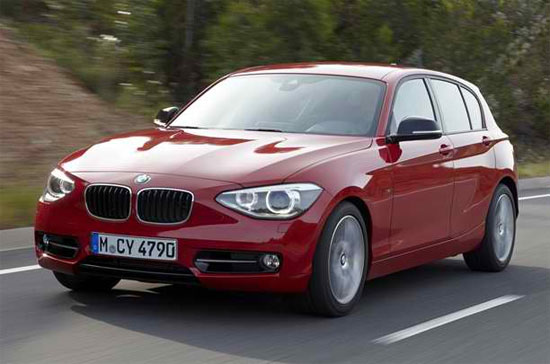 With competition from the Audi A3 and the Mercedes-Benz A-class, German automaker BMW, bolsters its stake in the small hatch market with the new 1-Series.

The new car uses the platform architecture found in the new 3-series but BMW restyled the look of the car to be more dramatic and aggressive with a shark-nose treatment and reinterpreted kidney grille. Quite honestly, I don’t think BMW pulled that off completely though it does look more stylish than the previous incarnation. Fans took quite a liking on the new design language though.

The 1-Series launches as a five-door hatch come September though a three-door version is set to be released by next year. A variant line-up of up to six models are also in the release lineup.

Thanks to the growing green mentality, the engine lineup will consist solely of four-cylinder engines including a 1.6L engine (same one found in the Mini Cooper) at two levels of tune (136 hp in the 116i and 170 hp in the 118i).

More powerful versions such as the range-topping 128iS that gets a 2.0L turbocharged unit are set to be unveiled next year. All the engines come with a six-speed manual as standard though a ZF eight-speed auto will also be offered.

The new car also gets a longer wheelbase which allows for a larger cabin size and more rear legroom. Luggage capacity has also been expanded to accommodate 360 liters making it roomier than the Ford Fiesta and the VW Golf.