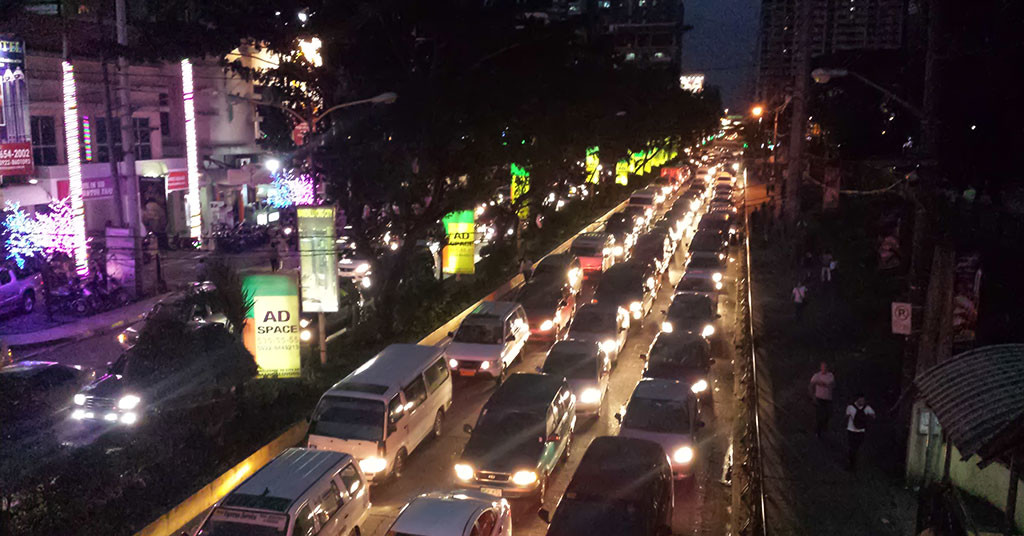 View the text of the MMDA's no-contact apprehension implementing guidelines

2.1 The image of the vehicle violating traffic laws, rules and regulations shall be recorded or captured thru the use of CCTV, digital cameras and/or other gadget or technology being used to capture .videos and images.

2.2 A First Notice signed by the I DO Executive Director and the cameraman who took/shot the video/pictures shall be issued to the Owner/Operator of the vehicle captured on the video/image.

The first notice shall indicate the date, time, location, traffic violation(s)/infractions committed, the assessed fines/penalties therefore and a photo-clip of the apprehended vehicle depicting the act of violating a particular traffic rule/regulation.

The first notice shall require the owner/operator/of the vehicle captured on the video/image to identify the driver and his/her address of the subject vehicle at the time and place indicated in the notice.

The notice shall likewise contain a statement that the traffic violator shall have the right to file a contest/protest before the MMDA- Traffic Adjudication Division (TAD) within seven days from receipt thereof and that failure to file the same within the prescribed period shall be deemed a waiver of such right to contest the traffic violation or present evidence in defense thereof.

The seven-day protest period may be extended, by motion of the party, for another seven days on meritorious ground with an attached duly executed affidavit of merit.

2.4 Payment of fines/penalties shall be made within seven (7) days upon receipt of the first notice, unless a protest/contest was filed by the traffic violator/driver/operator of the captured vehicle, as provided for in the preceding paragraph.

2.5 Fines/penalties and all charges indicated in the first notice may be paid to any authorized accredited payment centers unless a protest is filed before the MMDA Traffic Adjudication Division, in which case, the fines as finally adjudicated, shall be paid at the Central Office, Collection Division of MMDA located at the MMDA Bldg., EDSA cor. Orense St. Guadalupe Nuevo, Makati City.

2.6 After the lapse of the 7-day prescriptive period, there being no protest/contest filed and the fines/ penalties remain unpaid, a Final Notice to pay/settle the same shall be issued. If the traffic violator/owner/operator failed to settle/pay the assessed fines/penalties from the receipt of the Final Notice, the vehicle license plate number shall be included in the Alarm list and be reported to the LTO with the request that the registration of the same shall not be renewed until the penalties or fines are fully settled.

2.7 Notices shall be sent thru personal service by MMDA Personnel, registered mail or courier service through government or private service provider.

2.8 Traffic violators/owners/operators who refuse to receive/accept without any valid reason the notice issued to them shall be deemed to have received the same by leaving a copy thereof and submission of an affidavit of service or report attesting to the fact of refusal to receive by the messenger or service provider, hence shall be covered by the above provisions.

The MMDA has tried clarifying some of the issues. While there will be a no-contact scheme in place to catch “moving” violations (reckless driving, number coding, etc…), MMDA constables will still be on the ground but will be focused on administrative offenses like colorum vehicles. Still, traffic officers can flag violators.

We have our doubts with this scheme as well. CCTVs, depending on the positioning, angle, and quality of feed, might not provide full context of what has happened on the road. This isn’t as simple as red light violations where it can be black or white as long as you’re in the box when the light goes red, that can be pretty clear cut. Who knows if the officers surveying the feeds are actually trained to survey the scene to identify violators.

We find some of these provisions mucky as well. Say, for example, you sold your old car and the new owner commits a violation. Like many second-hand buyers, they’ve taken their sweet time transferring ownership (some don’t even bother). If this is the case, then all violations will be forwarded to your address. Based on the guidelines, you’d be the one responsible (and be hassled) to prove to the MMDA that you’ve already sold your car (deed of sale) and give the MMDA the new owner’s details.

In addition, the MMDA and the LTO should at least provide a transparent means for vehicle owners to check if their cars are flagged for any violation. Heck, if the MMDA could just sit in behind computer screens to “apprehend” motorists, they should also put up an online facility to contest as well.