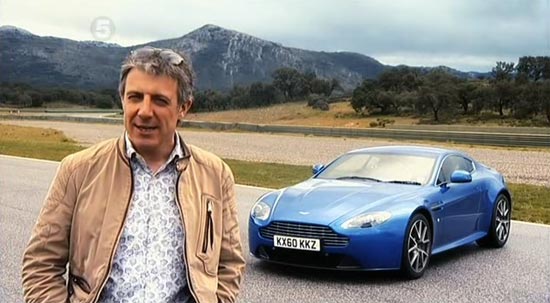 Here’s another episode for British second stringer motoring show – Fifth Gear. It’s the 6th episode into the 19th series of the show. I have to swear this the show has become stale and boring. Still, here’s the recap. Spoiler alert!

The first segment features Jason test driving the Aston Martin V8 Vantage S. Jason takes the Porsche 911 as the benchmark for the £100,000-ish sports car and finds the V8 Vantage S wanting compared to the good old 911. However, Jason highlights the noise and the looks as the best selling points for the Aston.

The next segment features a challenge featuring chef with Vicki. They attach a huge knife on the SLS. The challenge requires to slice the cucumber whilst drifting. Takes him several tried but finally gets it. It appears not to be a clean slice though.

The team reviews the Lexus CT200h hybrid. Most of the team do find the Lexus hybrid’s looks amusing at all but Jonny was raving about it though. The interior impressed everyone thanks to the cool gadgets but basically, it’s all Jonny who’s impressed by the car. Total score: 23 out of 40.

The episode wraps up with a segment.featuring Jason and Tiff in a dogfight using hovercrafts. Not really fun to watch two race car drivers struggle with such uncontrollable devices. Jason wins though.