Confronting jerks on the road 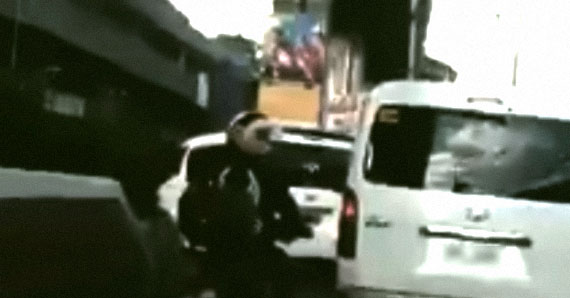 Talk about assholes on the road. Nothing embodies them best on Philippine roads other than makeshift convoys and their illegal wang-wangs*.

A video submitted by one Timothy John Remorca to Top Gear Philippines became viral recently. The video shows him confronting a convoy of white vans which allegedly ran a red light and nearly collided with him. A confrontation ensued where men from the convoy that cut him off tried to force him out of the vehicle.

WAS THIS NECESSARY? WHO ARE THESE MEN?

From Timothy John Remorca: "I want to share a video of a road encounter earlier today. Three white Toyota Hiace vans with flashers and wang-wangs just cut through traffic along Aurora Boulevard coming from Broadway. I was blocked by one of the vans and they all went out to gang up on me. A part of the video shows them pulling my arm out of my window to get me out of the vehicle, while one tries to grab my phone.I need your help in getting this video posted so proper authorities would know. One of them claimed he was a policeman, and all they could say was that they were heading to 'Central'. When I confronted them, they kept shouting, 'Alam mo ba yung sakay namin?' And when I asked what, they just kept trying to scare me off.I don't know what they were transporting, that they had to act like VIPs and use their wang-wangs to get their way through traffic and block the road just to scare me off. They all had LEVANT CLUB stickers."

As always, the mob has taken various sides on the matter. Some hailed the guy a hero for standing up to road bullies. Some lambasted him as an idiot for even attempting to do so.

I have to give it to Mr. Remorca for trying to stand up to jerks on the road. It’s also quite amazing how he kept a level of cool, not getting physical when the other parties already were. There’s always the argument that goes, if no one’s going to stand up to these kinds of people, who will? And for that, I sort of understand the veneration for the guy.

But he isn’t also without fault there. He was driving while trying to record the whole scene on his phone by himself. (Top Gear PH actually gifted him a dashcam for his efforts.) That’s distracted driving but given that it might be a life and death situation, you’d probably understand. It also appears that he also provoked the other parties with some spirited driving of his own as you can hear from his car’s revs.

The other party also already made their statements to the media trying to justify their actions. Here’s their interview with DZMM. Compare the video with what they’re claiming in their interview. You be the judge. (Props to Julius Babao for trying to put the other party’s claims into context.)

Thanks to technology these days, there’s evidence on video where it is obvious what transpired at least for those moments that were caught on footage. Trying to weasel a way out despite damning evidence makes people look guilty.

Now, for the rest of us, let’s just stick to defensive driving. There’s no point risking your neck and your family’s necks just to prove a point. We know the extent of how the powerful can get away with things. We can always try to go through channels to make our grievances known and avoid directly confronting the entitled and power drunk with our own road rage inspired vigilante justice.

As for jerks on the road, I hope justice will be served. Otherwise, we can hope that karma gets to them somehow. Or there’s always submitting your dashcam video to Top Gear PH.

*Isn’t it funny that the local term for vehicle siren alarms is a reduplication of the English slang for penis?