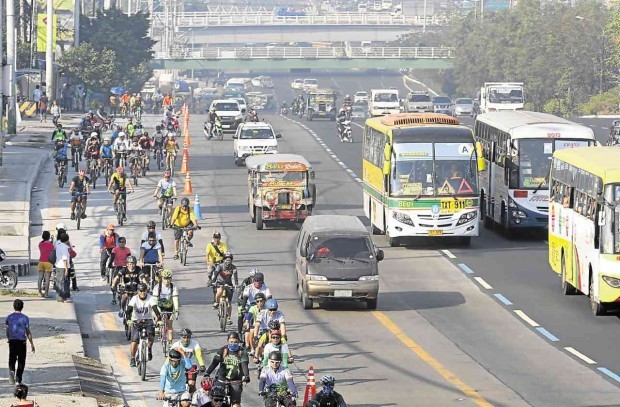 Last week, the MMDA tried out another road-sharing experiment on Commonwealth Avenue by putting up dedicated bike lanes.

The experiment allowed bikers to have the outermost lanes of commonwealth exclusive for their use.

Known as the Killer Highway (though I’m sure all roads in the Philippines share a psychopath gene), Commonwealth Ave. has been the subject of plenty of road safety experiments which include speed limits, motorcycle lanes, and concrete barriers for public utility vehicles.

The event was criticized though by representatives of the Families of Road Victims and Survivors (FRVS) saying that simple road sharing is dangerous. According to them, a protected dedicated bike lane should be the way to go.

I’m inclined to agree with them. For starters, motorists aren’t disciplined enough to share roads. A bike lane around Quezon City Memorial Circle has been in place for the longest time but how many vehicles do we see encroach on those double solid lines just to have their way around Elliptical Road. And even some bikers aren’t skilled or disciplined enough to make this work either.

What we really need prior to these technology and legal tweaks  is a mindset change first. We all have to be care enough to be disciplined and unselfish before any of these programs to work.